The shape of your windsurfing board greatly affects how it rides. It can be designed for speed, maneuverability, control, grip, big waves, small waves, chop, and more. As with all windsurfing gear there is always a trade-off in performance. For example with sails, you can select a sail designed specifically for speed, but it will lack maneuverability. If you select a sail built for maneuverability it will give up some speed (click here for an article Know Your Sail). We could put most windsurfing gear on a spectrum of performance benefits. Boards are similar in this regard. However, there are many shape features of boards, each with its own individual performance spectrum. Each of these shape features can be altered to provide different benefits that combine to make a whole board. Let's explore each of these shape features individually and look at how they work together when combined into a single board.
Please subscribe to my Youtube channel. Thank you!
(You must sign-in to your Youtube account to subscribe. Click here.)​
Here are the individual features in list form:
1. Volume
2. Foil
3. Length
4. Width
5. Rocker
6. Tail
7. Nose
8. Bottom
​9. Rails
​10. Deck

One of the most common convex bottom shapes for windsurfing wave boards is 'vee' shape. Vee will push water aside which makes it smooth in chop. A shallow vee can also help with transition from rail to rail as the board can rock from side to side fairly easily, which can help initiate turns. But if the vee is too deep it can start to actually hinder turning, so most windsurfing wave boards keep the vee fairly shallow. Often we hear the term 'panel vee'. It simply means the vee is flat from the rails to the deepest part of the vee at the centerline.

Now let's combine some of these bottom features even further. I was recently comparing two radical quad wave boards from two different companies. Both boards are ridden by top pro windsurfers in world class events, but the bottoms are designed oppositely. Board 'A' has vee in the front, double concave with vee in the middle, and single concave in the back of the board. Board 'B' has just the opposite. Let's examine what this does. With board A, the vee in the front helps with chop and gives good control. When the rider pushes hard on the tail of the board to turn then the single concave in the rear helps the rider stay on plane through the turn and still provides good grip while the front of the board may be out of the water a bit. The double concave with vee in the middle of the board helps with both planing and control. Board 'B' does the opposite. It helps the rider plane early with single concave up front. And the vee in the rear will prevent the board from bouncing when turning in choppy conditions and it gives more control in big waves. So, as we can see, there is really no 'right way' to design the bottom, just different ways for different benefits.

​Sometimes channels are put in the tail to allow water to flow through more quickly so the board keeps planing.
Please subscribe to my Youtube channel. Thank you!
(You must sign-in to your Youtube account to subscribe. Click here.)​
Video - Basic Windsurfing Board Bottom Contours
Rails - Rails can be hard or soft. A hard rail has more of an edge to its shape rather than the smoother curve of a soft rail. Hard rails turn better than softer rails, and they cut through the water easier. Soft rails give more float and stability. They are also more forgiving and spinnier for freestyle. Hard rails have better hold on turns, and are faster as the water releases easier. Harder rails are often used in the back of board for turning while softer rails are used in middle for floatation and stability. A straighter rail line (more parallel) is faster, while a curvier rail line turns better.
Deck -  A dome deck allows you to push the board over onto the rail a little easier and get a little more pop. A dome deck can make it a little easier to jibe and is generally considered more comfortable. A dome deck is associated with thinner rails as the 'doming' reduces volume at the rails while putting more volume in the middle of the board. A flat deck, in comparison, is associated with fuller rails that provide more side-to-side stability and, for this reason, works well on beginner boards. On freeride boards, the shaper will sometimes add a section of concave deck around the mast base which lowers the center of effort of the sail slightly. This lower center of effort helps to hold the front of the board down in high wind and chop, and it helps the rider close the gap between the bottom of the sail and the back of the board.
The above 10 features are combined in many ways by professional shapers to produce a board with multiple benefits. How do we begin to learn more about these combinations of features? I suggest that you start by going out into your garage with the specific intent of looking at each feature of your board and thinking about what the feature does for your board. Bring a long straight-edge out to your garage and lay it on the bottom of your board so you can more closely inspect the convex and/or concave bottom features. Do you see any vee? Ask yourself what the specific tail shape of your board does for performance. Pay attention to areas of your board where you see more volume. Notice where the widest part of the board is located. Run your hand down the rails to feel where it is hard and soft. Then go out on the water and notice when these features apply and how they feel. Go back into your garage to look at the features again, and think about how your board shape applied when you were on the water. Now get a different board and do the same thing. Compare the two different boards. Write down notes. Repeat this process many times over the next season and you will start to understand board shape. I have just started doing this in the last couple years, and it has made a significant difference in my understanding of board shape. This article is just a starting point in understanding board shape. It is very basic. Over the next few years I intend to personally explore shapes more thoroughly and add to this article. I hope you enjoy doing the same.
Related Articles:
Know Your Sail
Spin-Out: Your Fin or Your Sail?
The Importance of Your MAST 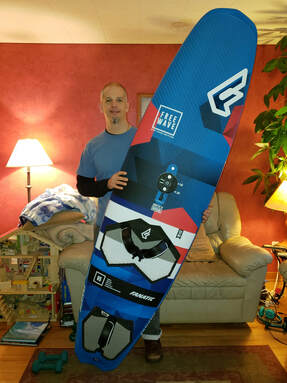