My board is getting more spinout with the new sail that I tried: This is likely to happen if you put a freeride sail on a wave board. It is the opposite of the above problem. A freeride sail has a lower center of effort which puts the rider out over the edge of the board more with greater pressure on the heels of the feet applying more pressure against the fin. The result is more spinout. Use a wave sail on your wave board and the higher center of effort will pull you more over the centerline of the board so that you are not leveraging against the fin. Avoid using a freeride sail on a wave board.

My wave sail does not have the same power as my friend who has the exact same wave sail model and size: Does your mast have the correct bend curve and stiffness? If your mast does not flex in the exact spots that the sail manufacturer intended (proper bend curve) then the sail will not have the correct foil shape, draft position, and twist. In addition, if your mast is too stiff or not stiff enough then the sail may jerk you around in gusts thereby disrupting your stance and result in power loss. Contact the manufacturer of the sail to learn what exact mast specs are necessary for your sail.

My wave sail does not give me enough power when riding frontside on the wave in onshore conditions: This is likely due to batten rotation and/or the number of battens. If your sail is designed with a lot of excess luff curve it will depower when riding waves frontside. A wave sail with less excess luff curve and more panel/seam shaping will retain its shape better and thus continue to deliver power. Additionally, you may need more battens. Five battens as opposed to three battens will allow the sail to keep its shape when frontside in onshore conditions so that you can maintain power.

My wave sail does not give me enough power when freeriding: Wave sails are not designed for freeriding, BUT....there are still things to address here. If your wave sail is designed with too little excess luff curve and too much panel shaping, then the battens may be derotated, which means an inefficient sail shape has been created. Power is lost as the sail does not maintain an efficient foil shape. Selecting a sail with a combination of panel/seam shaping and excess luff curve can be a nice balance to get a more versatile sail.

My wave sail jerks me around in the gusts: This could happen from several things. First, is your mast the correct stiffness? A stiff mast is going to jerk you around in the gusts because it does not have much flex. Second, does your sail have a lot of luff curve? If it has a lot of luff curve that means it requires more downhaul which bends the mast to its limits and makes the mast stiffer as it reaches that limit. Selecting a sail with less luff curve overall will give you more flex in the gusts. By checking with the sail manufacturer you should be able to learn what mast is best. Third, does your sail have a lot of excess luff curve. This will rotate the battens hard around the mast. In light wind you will have little power with the draft forward, while in strong gusts the power will increase as the draft moves back. This back and forth movement of the draft will jerk you around, and it will feel as though your harness lines are never in the right spot. Select a non-rotational power wave sail, with less excess luff curve, designed for onshore conditions rather than a rotational wave sail, with greater excess luff curve, designed more for offshore conditions. Fourth, have you downhauled the sail enough? If you have not put enough downhaul in the sail it will not have enough twist at the top which will make the sail jerky in gusts.
To conclude let's talk about choosing a good wave sail for use in Western New York on Lake Erie and Lake Ontario. We mostly have on-shore and side-on conditions here on the Great Lakes. That means our waves do not stand very tall, clean, and steep. We still need power in our sail when we are on the wave. When choosing a wave sail for these conditions we would want more battens as opposed to fewer battens to keep good power consistently in the sail. I like a 5 batten wave sail. We would also want a sail with less batten rotation so the sail does not depower on our small mushy waves and delivers more consistent power all the time. To accomplish this we should choose a sail with less excess luff curve and more panel shaping and outhaul. Different manufacturers have different design preferences. Some manufacturers are very committed to using lots of excess luff curve while others strongly oppose lots of excess luff curve. And, still, other manufacturers fall somewhere in the middle, sometimes offering a blended sail and sometimes offering two separate sail models. In addition, I personally prefer a sail with less luff curve in general so that the mast has a little more flex. You will need to check with the manufacturer to learn how they design their sails so that you can effectively choose a wave sail for use in Western New York.
Please subscribe to my Youtube channel. Thank you!
(You must sign-in to your Youtube account to subscribe. Click here.)​ 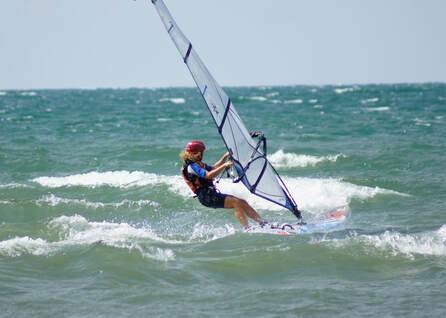